An interview with The Walkervilles 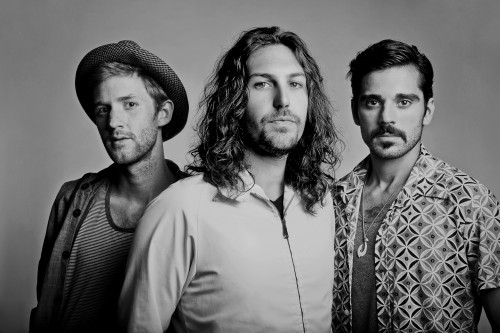 On November 24th, The Walkervilles showcased their groovy Windsor, Ontario blues-rock sound to a crowd at The Drake Hotel, one of the best sounding venues in Toronto. Watching them perform their set, it was obvious that the band was having a great time and their enthusiasm was contagious. The entire crowd stomped along through the short set featuring soulful vocals and guitar rhythms. The band demonstrated a clean, raw sound that is increasingly rare these days.

Playing songs from their upcoming album, The Walkervilles opened the set with the lively “Misunderstandings (Holding You)”, before they rocked through crowd favourites “Get Myself Into It” and “Get By.” Their classic Motown-inspired sound had the crowd captivated for the majority of their set. They closed with the buoyant “Tell Me How You Want Me,” which was a great display of singer Pat Robitaille’s vocal talent. Their debut album Meet The Walkervilles – Live at Mackenzie Hall comes out Dec. 21st. We got a chance to speak to Robitaille after the show:

For those who don’t know, who are The Walkervilles?

The Walkervilles are a three piece Motown/Rock/Soul influenced band from Windsor, Ontario; right across from Motown itself, Detroit, Michigan.

It really seems like rock and blues are getting more attention as mainstream music. What do you think about that?

We love it. It’s America’s music. The foundation of popular music as we know it is built on traditional blues. It’s nice to see the mainstream pushing real, raw music again.

The band hasn’t been around long, but you guys already have quite a following. Where do you think that comes from?

I think that there’s a classic but fresh sound to the Motown sound, and that has helped us appeal to so many listeners. It’s the kind of music that any generation can relate to and enjoy. Lyrically, the songs have been striking a big chord with people too. The music is real, it’s honest and it’s fun. The three of us are having a blast playing together and the crowd picks up on that as well.

How do you guys feel about the music community in Windsor, and Ontario in general?

The Windsor/Detroit area has been hit so hard by this recession and I think that where you have struggle, you have great art. Some of my favourite artists in Canada are from Windsor. The music community is very cool, all of the bands rely on one another, and The Walkervilles have certainly been heavily supported by the scene.

I know you guys have quite a few projects on the go. How do you balance and prioritize each of your projects, and find time to collaborate together?

The band has really shifted over the past few months to a full time gig for us. We do have a lot on the go, and we’ve all had some good success with our other projects, but we have a clear focus on this band now. I’m sure when things slow down for Walkervilles we will pick up where we left off on old endeavours, but this band is exciting for us right now.

Do you have any plans for releasing your first album?

Our first album is coming out on December 21st. The band rented out an old court house in Windsor called Mackenzie Hall back in September. We basically built a recording studio in the building the night before and recorded 10 songs in one day. Everything was done live so the album has a heavy concert vibe. It’s called “Meet The Walkervilles – Live at Mackenzie Hall”.

With the current state of the music industry, what advice do you have for aspiring musicians?

Stay real! Focus on getting as good as you can. Don’t spend time online trying to convince people to like your band. Just play nonstop and it will all work out.

If you guys could be opening for any band right now, who would it be?