When monumental decisions are made, it is often the general public that offers the best insight. After Arcade Fire won Album of the Year at the Grammy’s, I went to the Grammy Facebook page (a beacon of human discourse) to gauge the reaction. What I found was profound debate and thoughtful lamentations on the state of modern music. I chose some of the best to share. Dissidents basically fall into two camps, those who respectfully disagree with Arcade Fire making the Album of the Year and those who are certain that there has been some foul play. 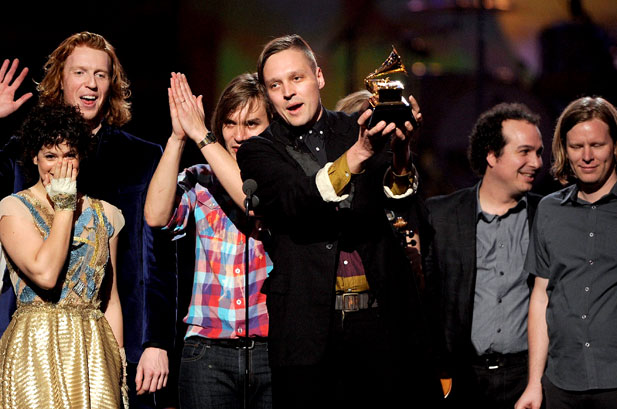 Those who respectfully disagree:

Eminem should win more than 2 awards especially ”Album Of The Year” Arcade Fire?? Who are them???

Recovery dezrved the grammy if not then need u now did this is disapointing :(

Ok seriously?!? The Grammy people suck!! People got Grammys that didn’t deserve them!! Arcade fire?! Are you f**cking kidding me?!? Who runs this crap? They need to be fired! Worst show ever!! Trying to be like the MTV VMAS,lmao!! Get a real ear into the music n not this crap that only a few peeps have heard of! 2 thumbs down!!

Academy,
Two words, U SUCK. Get a freakin grip and pick the deserving artists. The artists who everyone loves, and sings along to all year. Don’t pick some alternative rock, kings of leon wannabes (Arcade Fire)that noooo one has ever heard of. Its lame and u clearly have no clue what good music is. Pssh get a freakin grip.

The band that won “album of the year”? Yeah umm who the heck are they? never heard of them…never heard their music on the radio…wow that was a huge let down.

Well, I forgot it was on, and I never watch award shows; what surprised me was Eminem and I think his album should have been best of the year. That winning band leader lived in Montreal for some time and couldn’t even give it a French pronunciation, which is very easy–monrayall, in Kaybek, and I only speak and write un peu Francais. I thought they were mediocre.

Eminem does deserve the award! Wu else?

No one knew who the F Arcade Fire was before tonight! Wish that were still true for me!!!

As much as it makes my nuts shrink to say it, Id rather listen to Barbara Streisan than Arcade Fire who?!!!

Even with the ALBUM OF THE YEAR Award, I’ve never HEARD of the group that won that Grammy either. I think maybe the voting needs to be left to the PUBLIC (you know the people that actually listen to the music) ~ Come on now they supposedly beat out Eminem!

I am in shock that Arcade Fire won!!!! Nobody has even heard of them!!!!

Really, who are Arcade Fire? This will go down in history as one of your worst… Who is voting? You wonder why we hate the music industry…

I’m sorry but this years Grammys was kind of retarded and messed up. Nobody knows who arcade fire is! And they can’t really sing. And I haven’t ever heard of that girl who won female artist of the year! I cant even pronounce her name!!!!!!

IM SO PISSED! Who the F are that bnd! I didnt evn knw they EXIST! I hate you! :@ EMINEM SHOULD WON!

Maybe somebody knows something about Arcade Fire, that I don’t. They sucked. I would’nt play that crap in the mall, gym. And definately not on my IPOD.

Eminem and Katy Perry should collaborate on a song titled “Disgrace to the Human Race” and dedicate it to Arcade Fire who sounded like a middle school band that had a temper tantrum, really is this what popular music has come to…….? are they from Montreal?? is this America???

What a disgusting display of a winning album of the year. What the hell was that? No one has ever heard of them. They were terrible! It has to be a mistake because that was a scam. Worst Grammy’s EVER!!!!!!!!!!!!!!!

Never watching the grammys again.. WORST one yet! Arcade fire had the worst performance in history and did not deserve album of the year!! So rigged what a joke

you people are idiots… how are you gonna vote arcade fire best album!?!?! They are no where near the caliber of Lady A, Katie Perry, Lady Gaga, and most of all Eminem!!! Seriously how many #1 singles have they had compared to any of the other 4 nominated!!!! YALL ARE IDIOTS!!!! Never watching ever again!!!!

That was watered-down punk!! That sucked!

All Grammys suck, but this one is by far the worst!!! Arcade Fire=ghey!!!!

Eminem deserved album of the year, arcade who? who the hell are the suburbs or whoever really wow bunch of nobodys in my music libary..

If you have to Google a band to figure out who they are they shouldn’t have won the biggest award of the night! Anyone but that lame group should have one and it would have been ok…… GRAMMYS are the SCAMMIES!

worst grammy show ever! How can you give album of the year to some ridiculous band nobody cares about. Who votes for these winners? Obviousily people that don’t listen to the radio and what people want to hear. What a joke!

BOO!!! this is crap, who the hell is this band we have never heard of! GAGA OR EMINEM!!! you guys need to get current!

Whatever happened to talent? The best album award goes to a band that is mediocre and makes noise instead of music.What’s wrong with the world?

I hate the grammys of this year awful arcade fire what a hell were you thinking??? I reallu wanna know

q’ pedooo con los que gaaanaron el disco del añoo FRAUDE eraaaa LADY GAGAA? (I assume this is about Arcade Fire but I can’t be sure)

Sooo… SoundScan sales of the Arcade Fire’s ‘The Suburbs’: 486,000. Every other album of the year contender- more than 1 mil. – round of applause to them or Terrible Academy this year?

After that circus act?? I wouldn’t have hired them to play a kindergarten graduation after that.

I know my music an I’ve never heard of them ! Horrible !

Who is that? What album sold the most last couple years? Pretty sure it wuz eminem with recovery

Never heard of this WEIRD band before!!! SUCK! it’s undeserved I AM GONNA HATE THEM

who n what! Nebver even heard of thembefore so how can they win album of the year! YALL SOOOOOOOOOOOOOOOOOO Got it wrong!

What the balls? ! How did those folks from the hillbillies from the osarks win!? Not Gaga?!

DISLIKE*Infinity….. I am sure the jury has gone mad probably they had lottsa alcohol and picked up some random people for Grammys.. I hate this Grammys… Eminem or atleast Katy Perry…. complete bummer… :-(

O you mean to tell me that a MOSH PIT, any-race-hatin-other-then-their-own type of band Beat out ANYBODY ELSE in that category????????? WHAT A FREAKING JOKE!!!!!!!!!!! (I’m actually not sure what this one means but I think it fits?)

All of these unknown artists need to get there own award show… How can arcade of whatever… Win over eminem… Marshall Bruce Mathers III… The one the media loves to hate.. The one who always comes back with something mind blowing… And a Grammy award winning rapper… There aren’t a lot of rappers in the industry that are award winning like eminem… I’m just saying… Arcade whatever….. REALLY?! I mean REALLY!!?!?!?!

You people at the music industry are unreal!!! you should let the public vote, you gave grammys to people who are so untalented, a disgrace to the music industry, and people we have never even heard of, what a joke!!!! Eminen deserved his, but some of the others did not.

I AM SO BITTER! EMINEM DESERVE THIS AWARD OR KATY OR GAGA! I NEVER KNEW THAT STUPID BAND! :/ YOUR GOING DOWN DOWN DOWN D-O-W-N DOWN!

Arcade Fire is Crap!!!! GaGa was robbed. Nobody will know who the hell Arcade Fire is next year. That award was just pissed away. Thanks Grammys!

Worse grammy show worse album of the year, worse halftime show at the super bowl, whats my point music in this age sucks! Few good artists out there and Arcade fire who SUCK! and Fergie isn’t lookint that hot either. Eh Arcade Fire you suck!

WTF…..OMG seriously…..Who is Arcade Fire anyway? I listen to Eminem’s RECOVERY every freakin day….. that in my book is album of the freaking year, when you can listen to a freakin CD everyday and not get sick of it……Im totally disappointed.

ALL 4 albums of the last nominated list are out on worldwide radios…where the hell do they have AF…in Canada…?
and that’s reason to win what…? surely not the award the got !

Very disappointed in this – i don’t know anyone who knows about them – something is rigged!

Fans who are suspicious of possible colluding, corruption and bribery:

LISTEN!! THE GRAMMYS WAS RIGGED.. BECAUSE THE FIRM THAT COUNTS THE BALLETS IS ALSO FROM CANADA AND I’M PRETTY SURE IT WAS A MATTER OF MONEY EXCHANGING HANDS…… SUCKIST AWARD SHOW THIS WHOLE YEAR!!!

The Grammys are rigged. Just because some who thinks they know what’s good gets to vote doesn’t mean it’s good. At the end of the day music is a peoples game and not a persons game.

wth? Album of the yr went to who?Arcade Fire? Who r they really?Grammy’s sucked this yr!and who did Arcade Fire sleep with to get the award?

Esperanza Spalding N Arcade Fire??….well, these a surprising winners….never heard of them. Did someone hacked the database of the Grammy’s?

Grammy’s are so rigged…A crying shame that whomever decides the winners, do not know anything about music.

Rigged… Worst show in years… We dont care about the ones we dont know.. We want to see the best in the ones we do know. This is not the place to promote up and coming artists, but a place to recognize the artist that are pushing the envelop and making their mark on music. Not a place to give some unrecognized group/person a little publicity to boost their sales… Who determines what “Best” is. I listen to all genres and I can honestly say… That was not the best anything I have ever heard. Any one of the others could have won. Just not some no name unheard of band that basically sucked on their performance tonight. I have no interest in listening to their music based on those performances much less go out and purchase some random music made by them. Just saying.

Arcade Fire winning that last award against such talented other performers goes to show everyone what a good check, $$$$$ on the table will do for your career at “The Grammys”….start saving all you newcomers…next year could be your chance ! lololololol

…Later on, these folks listened to Sigur Rós and their heads exploded.

So I’ve procrastinated on writing this list for a while, mostly because I felt like 2010 was a great year for music. There was a lot to choose from when trying to find 10 albums, much from artists that I’d never heard of before this past year. With that said, there were also a lot of disappointments from some of my favourites. Ra Ra Riot, Sufjan Stevens, The National, Stars, Gorillaz, Born Ruffians and Vampire Weekend all released albums that I was not fond of. In fact, I even hated some of them (Stars, I’m looking squarely at you). The bright spots definitely outshone the missteps though.