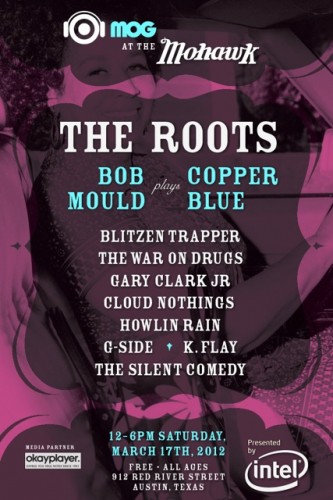 My final day at SXSW Music started off at popular Austin venue The Mohawk to see a hell of a lineup for the MOG.com party. Unfortunately, this RSVP-less free show also meant there was a hell of a lineup to get in. Gary Clark Jr. started off the day and was electric. His bluesy sound and unparalleled guitar work blew me away even while I was standing in line to see him from outside the venue. Definitely one of my favourite discoveries of the festival.

Philadelphia’s The War On Drugs followed with a swell indie rock sound. Kurt Vile and co. got the crowd moving and, at times, their sound was bit like a stripped down Arcade Fire. Excited to hear more from them.

Blitzen Trapper was next and having not heard their recent material, I was surprised to hear that they switched from their folksier sound to more of a classic-rock vibe. Though throwback is in right now (re: Sheepdogs), I kind of feel like it all sounds a bit generic. After a few songs, I headed over to the other stage to check out the much-hyped Cloud Nothings.

Cloud Nothings did not disappoint. Their brand of low-fi indie punk is impossible not to get caught up in (unless you were the crowd at The Mohawk that day, but I digress). Yelling out “I thought I would be more than this!” reminds me of when I first yelled out “You will always be a loser!” at my first Titus Andronicus show. Just awesome.

I was so caught up in that euphoria that I missed most of Bob Mould’s set but not being familiar with his work, I decided to leave that up the mass of older folks who were clearly there for him and him only.

The Roots closed out the day and everything I had ever heard about their live performances rang true. They were incredible. From tuba solos, to busting out classic tunes like “Sweet Child Of Mine” on guitar, to seeing legendary DJ Jazzy Jeff join ?uestlove on stage for a drum solo, to the impeccable delivery of Blackthought, they blew the packed crowd away. Consummate professionals. Possibly the best band I saw in Austin.

I decided to close off my night at one of the coolest venues I’ve ever been to, the Moody Theatre (where they film Austin City Limits). The acoustics in there were unbelievable and I was lucky to get a great spot on the balcony.

The crowd was ready for a loud night as Sleigh Bells strutted out in front of 12 massive amps. The noise was loud enough to drown out everything, including any clarity in Alexis Krauss’ delivery. That was probably for the best as I don’t think that she was offering much. Now this might sound a bit like “Get Off My Lawn” talk but I just don’t get it. The problem with this sort of music is that it feels a bit superfluous if the lead vocalist isn’t either: a) completely magnetic or b) contributing to the instrumentation. There were songs when she was solo on stage singing to a backing track, something normally reserved for “singers”. Instead we were stuck with what seemed like a poor man’s Alice Glass (of Crystal Castles).

But don’t just listen to me ranting. Judge for yourself:

My anticipation for the act after Sleigh Bells probably didn’t help her cause. Nas followed up by performing all of his groundbreaking album “Illmatic”. Joined on stage by DJ Premier, Pete Rock and AZ, it was Nasty Nas in his element. Songs like “It Aint Hard To Tell” and “The World Is Yours” seemed to cross off a line on most of the crowd’s bucket lists. He also played some new material which sounded promising and other classics from his discography (“One Mic” and “They Shootin'” were standouts). Overall, an incredible way to end my SXSW experience.