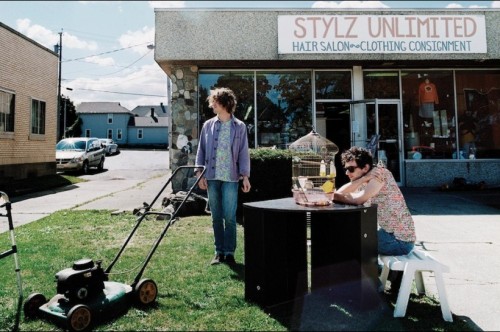 Perhaps the biggest issue MGMT—specifically, founding members Benjamin Goldwasser and Andrew VanWyngarden—have faced since the release of 2007’s Oracular Spectacular is that of audience expectation. Their debut album introduced listeners to a handful of some of the year’s catchiest pop tracks which, on paper, should not have been so popular in the first place: a hybrid of psychedelic rock and synthpop, sung with nasally intonations by VanWyngarden. But what emerged was a splash of creativity and freedom granted by their own indie sensibilities, combined with the hooks of popular music (although VanWyngarden begs to differ in a recent interview, stating that “[they] can’t write a pop song“) that amounted to the album’s shared appreciation among a wide array of fans of varying genres. While this largely describes the album’s first five tracks, the proceeding half veered away from the catchy psych-pop which popularized them, and into the more purely abstract psychedelic rock aesthetics which granted zero singles.

It was the album’s second half which would, in hindsight, become representative of the group’s biggest dilemma: to either continue writing easily accessible songs in the vein of “Kids” (which was both nominated for Best Pop Performance at the Grammys and has sold over 1 million copies in the US alone) or stray from what made them popular by writing an album full of “4th Dimensional Transition”. They opted for the latter, suffusing their trademark psychedelic tendencies with a much more surf rock-oriented approach on 2010’s Congratulations. The album still remains as divisive as it was upon release, causing frustration for those who lamented the lack of any form of a friendly pop track (as heralded by Goldwasser’s comments in 2010, though four singles were still squeezed out of the album), and jubilation for listeners who respected the album’s non-mainstream approach. Regardless, the group’s emphasis on guitar-driven rock signaled a decided shift in their musical tendencies, and would set up the ultimate question in anticipation of their latest self-titled release: Will they return to what made them famous in the first place or carry on with a polarizing sound?

The answer, unequivocally, is the latter. MGMT’s third album is uncompromising in its approach to isolating their fans, pulling the psychedelia of Congratulations to an extreme while stripping away its surf rock fundamentals, obliterating any form of chorus/verse structure, and transforming Oracular’s poppy synths into layers upon layers of noise. Describing the album is an extraordinarily difficult task unto itself, as there is hardly any form of a truly identifiable “sound”; rather, it dips, dives, and weaves through a variety of interrelated genres and acts affiliated with, and extensions of, psychedelic music, most notably shoegaze, drone, and ambient.

MGMT‘s opening track, “Alien Days”, is also the album’s first single, and is such for a good reason: among the album’s ten tracks, it is perhaps the most clear-cut amalgamation of MGMT’s first two efforts, combining the glitzy synths of Oracular and the guitar riffs of Congratulations, backed up by some heavy drumming which feels evocative of John Bonham’s in a song like “Kashmir”. Perhaps above all else, however, the track recalls the psychedelic/space rock of The Flaming Lips (the album’s co-producer, Dave Fridmann, is perhaps best known for co-producing nearly all of the Lips’ records) through its dreamlike and fuzzed-out vocals, layered composition of synths and rock instrumentation, and sound effects which seem to emulate those of a 1960s science fiction film. This comparison could very well be applied to a majority of the album, though it does not begin to scratch the surface of its schizophrenic nature.

“Cool Song No. 2” is imbued with the aesthetics of world music, while simultaneously being driven by the pounding of a piano’s low keys and the gothic sounds of a keyboard that arouse the haunting organ of The Phantom of the Opera. Given that the track will be released as the album’s third single, it is interesting to locate its status as representing the album to the general public in comparison to those of the previous two albums: inaccessible to most casual listeners, and hardly a “typical” selection for an artist’s single.

But, of course, typicality is at the end of MGMT’s to-do list on this album. “Your Life is a Lie”, the album’s second single, is marked by a staccato-like delivery in vocals and sound, abrupt as it is harsh, while also containing some of the group’s most ominous lyrics. In comparison, “I Love You Too, Death” combines the ambient synths of M83 with the heavy, repetitive drums of The Knife, and the female vocals running throughout recall My Bloody Valentine, all of which form a track which can be thought of as a combination of shoegaze, drone, and ambient.

What results, then, is an album which errs on the side of intangibility: largely indescribable, MGMT have concocted a set of songs which should be thought of as their most obtuse yet, both lyrically and sonically. While MGMT may be too musically incoherent for many, others will find pleasure in the group’s efforts to further distance themselves from the pop hooks that made them so popular six years ago. As a standalone album, MGMT is an inventive juxtaposition of psychedelic rock, pop, and electronic styles, one that reflects the group’s own diverse tastes and disinclination to conform to a single, digestible category. As an album in the group’s oeuvre, it very well may be the pinnacle of their own distorted brand of psychedelia, as experimental as it is fragmented, dreamlike as it is threatening.

The evolution of MGMT’s sound and their dedication to committing themselves to music based solely on their own desires- ones that are probably inconsistent with those of their initial fanbase— reflects the ethos of a band refusing to conform to audience expectations. As superficial fans will make one last push to demand another “Electric Feel”, MGMT will simply pull away just as hard, emphasized by their unwillingness to play some of their biggest hits at shows over the past few years. The difficulty in listening to their latest album will likely either be seen as a welcome treat or a damning move, depending largely upon where your expectations of MGMT lie. Perhaps the best lesson of all, here, is to simply no longer possess any expectations when it comes to MGMT.