An Interview with Paul Smith from Maxïmo Park 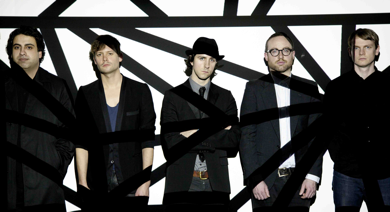 One of my favourite memories of first year university would be locking my door, closing the blinds, and jumping around to the freshest britrock that I could find (my secret’s out). During that phase, I remember listening to bands like Bloc Party and Franz Ferdinand on repeat, almost to the point of nausea. I was obsessed, and I wasn’t the only one. North America was swept up by that sound and it was inevitable that the tides would turn. Eventually the modern British Invasion subsided and bands were left to either adapt (as the Arctic Monkeys have) or fade into the distance (The Bravery?).

One band that stood out to me during that phase was Maxïmo Park. They sold millions of records as one of the best bands of that movement but they they were never as big in Canada as some of the aforementioned bands. I’m not sure why as their debut album A Certain Trigger contained absolute gems like “Graffiti“, “Limassol“, and my anthem “Apply Some Pressure”:

That debut was good enough to be nominated for Britain’s prestigious Mercury Prize. After that success, they released two more solid albums, Our Earthly Pleasures (in 2007) and Quicken The Heart (in 2009). I hadn’t heard much about the band in the years since, until recently discovering that they were recording. The results of those efforts is a new album called The National Health, released last month. While my britrock tastes aren’t as all-encompassing as they once were, I’ve thoroughly enjoyed the album. One thing that has always struck me about Maxïmo Park’s music is the honesty of lead singer Paul Smith‘s lyrics and he’s in form on this album. Darker brushstrokes to reflect times that are tough for many. The lead single is “Hips and Lips”:

I was able to ask Paul Smith some questions about the career arc of Maxïmo Park and what’s next for the band:

“A Certain Trigger” seemed to come out right when the UK rock invasion of North America was taking place, what are your favourite memories of that time period?
A couple of shows that stand out include playing with Vic Chesnutt at the Levi’s shop in Austin. Even through the show was weird it was amazing to be a new band in the same room as someone who I’d listened to and be playing on the same bill. Also, playing in Tonic, NYC before it shut down because it was a cool venue and we’d seen some experimental music there before. The list goes on: I bought my favourite Leonard Cohen t-shirt and some rare (ish) ECM records in Toronto; going to Amoeba Records in San Francisco and LA for the first time; driving around the Hollywood Hills at night with our pals The Blood Arm; visiting Motown’s Hitsville Studio in Detroit. So many good times!

What was it like to be nominated for the prestigious Mercury Prize so early on?
It helped to get our music into a lot of new people’s lives so we were extremely grateful for the exposure. Being on an independent label and not being fond of compromise, we needed all the help we could get and the Mercury prize is seen as quite a prestigious, music-lovers award as opposed to something like the Brits, which is very much an industry-driven award ceremony. Of course, the Mercury has now become an annual industry event but at least it provokes discussion and is judged on merit rather than sales and celebrity.

It seemed inevitable that the immense worldwide mainstream success of British bands like yourselves, Arctic Monkeys, Kaiser Chiefs, Kasabian, and Franz Ferdinand would eventually cool off, how do you feel like you’ve had to adapt to stay relevant?
We always felt out on a limb to some extent, being from the North-East and being on Warp. I think it suited us to keep our distance from all the hype even when it was at its most intense, so that after the boom for British bands was over we remained confident of our own motives and, hopefully, stood out from the more derivative bands. We made our first album without thinking too much of a particular audience, so even when we gained one, we tried to pursue our own creative path safe in the knowledge that we naturally lean towards what we would term ‘pop songs’ in our writing. A band should evolve naturally according to their own influences and creative ambitions and I think we’ve done that, album by album.

You’ve said that your latest album “The National Health” seeks to tell a darker story that mirrors the times, what most inspired this direction?
I read the newspapers and watch the news every day – it’s almost an addiction to current affairs! I also don’t drive so I get public transport everywhere and try to observe the world I live in, which I then combine with my own personal viewpoint and experience in the lyrics. Some of the music, like the title track and a song called Banlieue, were also pretty dark and aggressive musically, which, in turn, helped me to find words that matched up in some way. I think the album is about finding light within this darkness, by pulling yourself up out of your own personal problems. It acknowledges the complexities and negative side to life, especially in a global recession, that seem to have made people more conservative and cautious, but ends up being quite positive and upbeat because we always find a way to start anew, somehow.

What excites you most about hitting the road for a tour again for the first time in five years?
Just playing the songs to people, really, because we love them and want the world to hear us! Oh, and we also get to see really inspiring places, from the idiosyncratic small towns to the excitement of the big cities.

It seems like your latest video highlights the virality of Youtube, how do you feel like distributing music has changed since your last release 3 years ago?
It’s all online now! We still love and are avid consumers of the physical product, specifically vinyl, but the world has come to appreciate the convenience of the double-click and I can see that point of view, too. People don’t put a record on so much, they watch something on YouTube or link to it on a social networking site. Playing live was always one of our strengths so that’s helped us sustain ourselves since physical record sales are in freefall, generally-speaking.

Are you coming to Canada/Toronto anytime soon?
Not in the near future, but we’d definitely like to return sooner rather than later. It costs a lot to come over so we have to make sure people are going to come to the shows before we make the commitment, which sounds really dull, but that’s the reality! I have great memories of playing Toronto and Montreal so we’ll see if Canada catches on to The National Health and then we’ll try to make plans.

Freestyling is an important form of expression in hip hop. If you had to freestyle four lines about “The National Health”, what would you say?
This album is raw
It’ll have you down on all fours
Like Bob from Twin Peaks
It’ll turn you all into freaks!