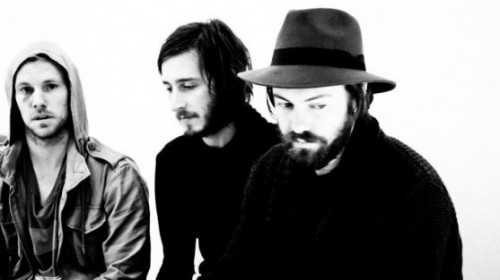 Los Angeles trio Wildcat! Wildcat! (sharing an affinity for exclamation marks in the middle of their name with The Go! Team and Godspeed You! Black Emperor) quickly piqued curiosity this year with noteworthy live performances at SXSW (as championed by Time Magazine and Buzzfeed), supporting acts like Alt-J and Portugal. The Man. If the recent release of their self-titled debut EP is any indication, curiosity will soon be turning into adoration and admiration, even if the group’s largely unidentifiable sound will relegate them to cult status over mainstream airplay (and is that really a bad thing?).

WC! WC! deliver a deliciously idiosyncratic approach to dream pop, complicating  its traditional wall of sound with a complete lack of guitar and hip hop-influenced beats. “The Chief’” introduces their “wall” and highlights Taylor’s falsetto vocals in particular, their fragile nature turned waiflike through the heavy use of reverberation, which helps to form the core of the track and the EP as a whole. In “Garden Grays”, the falsetto is paired up with vocals recalling the hushed, trembling quality of Thom Yorke, the layering of the two pushing forward the dreamy and pensive nature of the EP’s overall sound. While such a function of the vocals can be evidenced throughout each of the EP’s four tracks, the keys act similarly, often twinkling in the background (reverbed) to evoke a playful and dreamlike sensibility, while maintaining a softness that could permit one to either dance to the music or enjoy it in a relaxed state of mind—a fine line which is difficult under normal circumstances, but which is seemingly executed with brevity for the trio.

Yet, for all of the more traditional dream pop rudiments WC! WC! perfect, it is in the element of surprise with which they fully grab the listener’s attention. “The Chief” begins with a deep, heavy electronic drum beat which is heavily inspired by hip hop, only to segue right into a fluid keyboard piece. Bookending the track’s element of surprise is the introduction of a saxophone, beautiful not only on its own terms, but fitting in extremely well with the song’s airy aesthetic. While it also has that reliable reverb applied to it, its placement assures it does not overwhelm the rest of the music, instead being utilized to increase the track’s serene atmosphere (a la the saxophone solo in M83’s ‘Midnight City’, coincidentally associated with dream pop-like aesthetics).

What Wildcat! Wildcat! have brought forth on their major debut is a sound which is impressive both in terms of technical proficiency and creativity. The multilayered instrumentation for only three members is surprising, yet never becomes muddled or overambitious, reflecting both the expertise in production for the EP, and the trio’s inherent creative ambitions. WC! WC! have landed on a sound which utilizes the deep, repetitive beats of hip hop with the aesthetics of dream pop that emphasize sonic texture over pop chords or rock riffs—and, in so doing, have concocted a set of tracks which will, hopefully, be a hint of what is to come for this exciting trio.