Tag Archives: let me love you

An interview with RÁJ 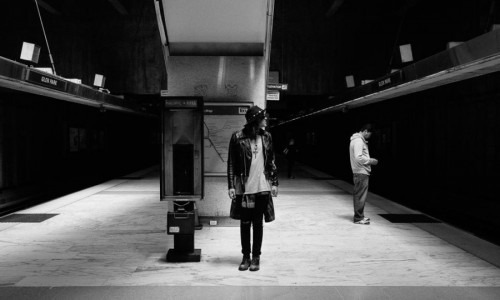 In September 2013, Zane Lowe on BBC Radio 1 debuted a track entitled ‘Ghost’, performed by LA-based singer-songwriter, RÁJ; in April 2014, the artist followed up with the song ‘Let Me Love You’. Both tracks are notable for their stark lyrical honesty, otherworldly atmosphere, and combination of traditional folk aesthetics with various degrees of brooding distortion. The artist has previously been lips-sealed on personal details of his life, background, and music, choosing instead to deliver somewhat-cryptic Twitter messages. That is, until now…

There has been a scant amount of background information available on you. As such, would you be willing to provide some of the most elementary of these details? Perhaps your name, birthplace, or birth date?

To what extent has the hiding of your personal details been deliberate? Why might this be the case?

It hasn’t been important at all for me and the initial campaign. When I put out my first song “ghost” we released my name, my location, and a photo of myself. I’m fairly open actually, and pretty much willing to answer anything. My twitter is @rajnoise, ask away.

How important has social media and online distribution (including uploading and streaming services) been to the establishment of your own ‘identity’?

I think that in today’s entertainment world, it is the only way for artists to stay relevant. Social media is SUCH a beautiful thing. I can let the world know everything I want you guys to know, when I want you to know it, and it’s coming right from my mouth. We “the entertainers” are controlling the information that is given out about us. Before social media existed we were being spoken for by companies and brands, like TMZ, who go out of there way to manipulate a situation for their benefit, regardless of what is the truth.

How did you become a musician?

I always knew I could sing. I would be sitting in the back of my car with my mom when I was little and would sing along to what was playing and I always remember her looking back smiling at what was coming out of my mouth. She’s an incredible singer, so I think I got a little bit of her gift.

Are there any non-musical influences that have had an impact on your attitude to being a musician?

Yes. Anyone, in any field, who is considered “the best”. Woody Allen is first who comes to mind. I don’t know a TON about Woody, and I haven’t seen all of his films, but what I do know is Woody sticks to his guns. He has such a distinct taste and style, and it wins. Seeing someone “win” time and time again by doing exactly what they want is so inspiring. And Woody is SO himself. It’s really amazing. Also Johnny Depp. He definitely isn’t the most well rounded actor, but what an amazing guy. Every role he takes, he makes his own. Everything he does is just an extension of Johnny Depp. That’s how I want to be. I want to go play and sing on old blues songs, and you guys can hear ME. I want go feature on Kanye West hooks and I want you to still hear ME. I want everything I do to just be an extension of the core of RÁJ.

How would you describe your sound? What other music was perhaps an influence on you, and would you be able to provide any comparable artists for those who may be unfamiliar with your work?

I’m still finding that out. It’s becoming much clearer to me these days. The only thing I can say I strive for is to be tasteful. It’s such a vague word but I think if you understand it, you know exactly what the word means. I’m really inspired by darker sounding music generally. Oasis is my exception there, but they even have their dark moments (“Wonderwall”, “Talk Tonight”, “Morning Glory”). Radiohead, Lana Del Rey, Sidney Betchet, Jeff Buckley and Burial are my go to influences. They’re all such amazing artists.

Your music is quite open-hearted and introspective, and implements interesting usages of more typical folk instrumentation with heavy effects of distortion and reverberation. What is your approach to songwriting? What guides you in this process?

I don’t know anymore. There isn’t really a process these days, I just let it happen. In the past, I would generally start on guitar, write a melody, throw a couple words together, and then take it to the studio.

I had previously described your two tracks with some of the following terms: dark; minimalistic; brooding; ethereal; and melancholic. Yet, I had still referred to them as ‘pop’ tracks, atypical as they may sound for such a designation. Where might you stand in your approach to ‘pop’ music? Would you see yourself as a pop artist?

Yes, 100%. It is my goal, and I’ve just came to this idea recently, to be a pop artist. Not in the sense of production, but in the sense of being popular. I’m not saying I’m going to compromise my vision for what I think will do well, that’s the opposite of what I’m saying really. I’m here to take my abilities and write music for the entire world. For everyone’s home. I’m interested in writing songs your mother will love, and your super hip elitist brother or sister loved 6 months before you found it (classic art elitist). I want to make art that I like and in return the world likes. That’s my goal.

The video for ‘Let Me Love You’ contains some heavy symbolism of spirituality and religion. How central are these concepts to your songwriting? (And, perhaps by extension, your life?)

Songwriting? Not so much. I haven’t gone there yet. But in my life, heavily. “GOD” is an English word, and the concept seems Western to me. But the concept of “GOD” is rather worldly, or at least it should be. I believe there is a higher power that created all man. I believe Buddha, God, and Allah are all the same person (I know I’m missing a few). But it’s really been butchered. I don’t go to a specific church, and I don’t practice a specific religion. But I believe and respect in a higher power.

What was the impetus for having the video for ‘Ghost’ be one of a cinematic breed? Would you see it as being any less ‘personal’ than that made for LMLY (which is composed entirely of amateur footage of RÁJ walking around various areas of France)?

It was just fitting. I don’t know if it was so thought out to not have me in it. It just felt right though. In hindsight,  maybe it’s less personal to the viewer (me not being in it), but it’s still a moving video. I don’t think it lacks passion at all.

What can we expect from you in the near future? A full EP or LP release? A continuation of your current touring?

I’m just writing right now. It’ll all come out eventually, I’m not sure if it will be an EP or LP, but I’m working hard at making it the best it can be. That’s my main focus. What comes after it, I have no clue.

And, finally… Have you caught World Cup fever?

YES! Love the World Cup. I don’t pay attention SUPER closely, but I have seen majority  of  the games. Predicting  Netherlands win.

RÁJ has most recently performed as part of KCRW’s Chinatown Summer Nights series on Saturday, June 14, in Los Angeles.

RÁJ – Let Me Love You

Last September, an artist known as RÁJ had a track debuted by Zane Lowe on BBC RADIO 1, entitled ‘Ghost’. At the time, not much was known about this figure: his online presence was replete with cryptic Twitter posts, elusive interview answers, and images of himself which showed a middle-aged man largely cloaked in black, often with a scarf covering his face and a fedora hat revealing only a glimmer of his eyes. With almost no background information, RÁJ encouraged us to focus on the very thing we may often leave subjugated to an artist’s image: the music.

The music, however, was itself a reflection of his image, the center of ‘Ghost’ is a reverberated acoustic guitar with soft, fragile vocals, and slow, heavy drums leading to a catharsis of falsetto cries, electronic swirls, and sweeping strings. Minimalistic and dark, RÁJ ensured this was going to be a pop track without much ‘pop’, but fascinating and open-hearted in its own unique manner. It is fitting, then, that his latest track, ‘Let Me Love You’, both continues this tradition of evanescence while carefully allowing the listener to gradually understand him better. With its honest, sorrowful lyrics of pain and loss, the echoes of guitar and brittle vocals emphasizing that isolation, and a bass that rumbles heavily, ‘Let Me Love You’ becomes a natural companion to ‘Ghost’. RÁJ’s dark pop aesthetic continues to bewilder and fascinate. The slow buildup to falsetto calls of desperation (“Let me love you/‘Til it hurts”), distorted drums, and yawning strings is familiar when also listening to ‘Ghost’, yet is unlike many artists today who utilize acoustic/vocal pairings to detail their emotion. It is otherworldly, yet familiar; distant, yet relatable, the shift from a tender melancholia to one of a purgative nature marking a move from introspection to desperation itself.

While the video for ‘Ghost’ detailed a narrative of a female coming undone, LMLY takes a more biographical approach. At its surface, a man is walking around the streets of France in a bout of seeming wanderlust. This, however, not only helps to visualize the song’s themes (isolation, introspection), it also allows for a connection between artist and viewer. The song takes on a wholly personal dimension for RÁJ, allowing us to both better understand enigmatic figure, and to see him as inherently relatable. In turn, RÁJ opens himself up to a greater extent in establishing an ‘image’ for himself, yet the music is still (rightly) taking precedence.

Perhaps what the video most helps with is allowing us to finally understand what the mystery, intangibility, and ambiguity surrounding RÁJ and his music is all about: spirituality. As the track begins with the ringing of church bells, many of the proceeding images are of a mystical nature: the stained glass windows of a church; a crucifix; and various sculptures of who appear to be historical or biblical figures. RÁJ may thus be representative of somebody who is seeking guidance from a higher power or, perhaps conversely, is disavowing it through his own pain. These could alternatively be interpreted as attempting to come to terms with one’s own state of limbo. Whatever the case may be (and this uncertainty seems central to appreciating his music), RÁJ continues to only let us see fragments of the entire picture, which may be an extension of how he sees life itself. In so doing, this becomes some of the most open-hearted music in recent memory, and the continuation of RÁJ’s journey is one in which we should all participate.

Tagged let me love you, raj