One of the highlights of this past weekend’s Osheaga music festival was seeing the always-engaging Hey Rosetta!. During their set, they debuted their new single “Kintsukuroi”, a sparkling-track that has an instant familiarity. I think it’s one of their best yet. Apparently the term refers to the Japanese art/philosophy of repairing pottery in a way that highlights the fact that it was once broken. Displaying cracks proudly, rather than hiding them. 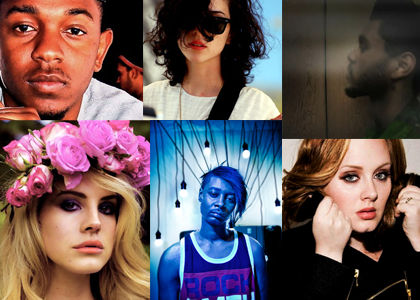 The lack of a standout, groundbreaking album separated 2011 from 2010. Last year, we had The Suburbs, Kanye’s twisted fantasy and Titus Andronicus’ epic call to arms. This year, we instead had slightly disappointing follow-ups from Bon Iver, Fleet Foxes, Feist, The Strokes, TV On The Radio, Radiohead and a bunch of solid slightly-memorable albums. With that said, if I were to choose an album that stood out from 2011’s offerings, I’d say that Adele’s 21 spoke the most to me. It used to be a lot cooler to say that you were a fan of Adele before her meteoric rise to fame but if someone wants to pretend that Adele doesn’t have one of the best voices in music and that her heartwrenching songs aren’t up there with some of the best pop music of the past decade, well, I respectfully disagree. House Of Balloons (The Weeknd) and Strange Mercy (St. Vincent) are up there as well.

Due to the lack of a lot of stand-out albums, I thought it would be more interesting to look at some of my favourite songs from the past year, so I present:


It seems like tUnE-yArDs has a love-it-or-hate-it sound because every time I rave about this song, I get some weird looks from my friends. Love the way it kicks off and the unexpected directions it takes you along the course of the song. A pleasant surprise that definitely gets your head nodding.


The dreamy country twang that starts off “Carrizo Plain” is a nice intro to a slow and steady build. The climb to a refrain of “you and I are intertwined” paired with understated harmonies makes this song a favourite of 2011.

9. Fucked Up- Queen Of Hearts


I don’t think I really “got” Fucked Up until I was at their NXNE show and got kicked in the face in a moshpit while Damian had his shirt off yelling at the top of his lungs. Even though it isn’t really a genre that I listen to often, “Queen Of Hearts” has just enough of a “something else” (possibly the female vocals) that makes it a favourite.


Though their album On The Water was largely forgettable, “Balance” had something fresh and addictive about it that made it impossible to not replay. The 80’s Bowie “China Girl” vibe, the fantastic video, and the unique vocals really made this an endearing track.


At first Kendrick Lamar‘s flow on tracks like “ADHD” really put me off. Then I sat down and gave Section 80 a thorough listen. Needless to say, I was absolutely blown away by some tracks. Conscious hip-hop like back in the days of Non-Phixion. His flow on this track is what I wish Kanye’s verses on Watch The Throne would have sounded like. Food for thought, bitches.

5. The Weeknd- What You Need


With his three 2011 mixtapes, The Weeknd is single-handedly saving R&B. Though each release had its strengths, House of Balloons was undeniably my favourite. On this track, the production and Tesfaye’s voice just envelops you in an atmosphere that makes it impossible to confuse what you want and what you need. Smooth is an understatement.


Disarming in its premise and beautifully executed, songs like this make you realize that sometimes, all you need is a voice and a piano. With that said, it works best when that voice is Adele‘s. I don’t think it’s possible to watch her perform this track and not be moved. Her staggering success in 2011, which was otherwise dominated by LMFAOs and Pitbulls, really is awesome and well deserved.


Unique and incredible, I’ve never heard anything like this track before. The unconventional artistry of lines like “your Hemingway jawline looks just like his”, the unexpected anti-cop climax and the brooding undertones, there is just so much to love about this track.


One of the best bands I’ve ever seen live, I’ve struggled to enjoy Hey Rosetta!‘s recordings as much as when I see them in person. With that said, there’s always a few tracks that blow me away in both settings and “Welcome” is certainly in that camp. Trademark crescendoes, a beautiful breakdown and the lyrics are a treat.


In a year full of enigmas like WU LYF and The Weeknd, I feel like Lana Del Rey‘s old Hollywood image has caught some unfair criticism. Whatever you think of the premise, it’s impossible to not get caught up in the swirling strings and captivating words of “Video Games”. It doesn’t hurt that she’s gorgeous (depends on who you ask though). Makes you rethink the gaming. For a while.