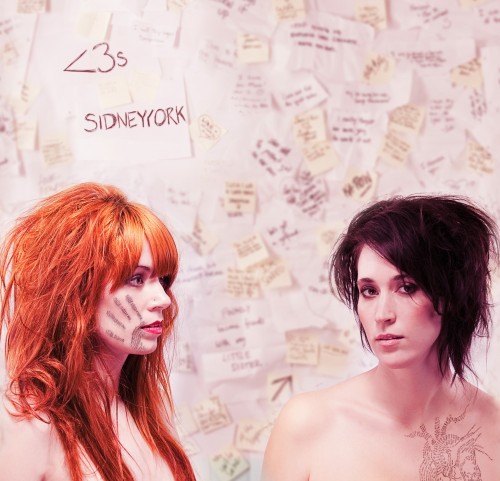 Calgary indie pop duo Sidney York (consisting of opera singer Brandi Sidoryk and bassoonist Krista Wodelet) make it visible from the title of their forthcoming EP, <3s (Hearts), that their view on modern romance is largely informed by technology, which itself has drastically affected the ways in which relationships bloom, develop, and fall apart today. Nowhere is this more apparent than on the track “Electrolove”, in which Sidoryk desires: “Whisper sweet technology/The way you reboot makes me scream/Robot electricity/Speak soft to me in binary”. While the trope of using technology as a metaphor for love in today’s technocentric society isn’t exactly novel, it fits in with the sound of a group using electronic music to convey ideas of love, romance, and relationships. The correlation between the lyrics and music are further emphasized by way of an assortment of electronic beeps, whirrs, and pew-pews coursing through the song’s backdrop, bringing the duo’s sonic and thematic goals full circle in a track that utilizes a groove to propel the song forward.

In this way, then, does the track find itself aligned more with the downtempo, slow-burn electronic sound of Toronto-based Austra than, say, another Toronto synthpop act, LIGHTS, whose overly airy nature has often drowned the listener in its saccharine bubbliness. Unfortunately, the other track on York’s EP, ‘Hearts’, falls squarely into this mould, its poppy sound almost too sweet from the outset. The lyrics on love and romance follow a more traditional pop song route than those found in “Electrolove”, which, when joined with the rather generic vocals (which is unfortunate, given Sidoryk’s range and power as found on their first album, 2011’s Apocalyptic Radio Cynic), syrupy synths, and a brief heavy guitar interlude (which seems highly out of place), deliver a track that is as upbeat as it is forgettable.

The two-year span between Cynic and <3s has, at least based on these two tracks, reflected a shift from more instrument-oriented indie/baroque pop to synth-heavy electronic. And while this isn’t an inherently negative attribute for any artist, it can often lead to strong feelings of said artist losing their unique musical identity, throwing away both the qualities of musical variety and personal imprint for songs that sound as if they’ve been mixed and written for half the budget, in half the time. If Sidney York are, indeed, making a similar transition for their upcoming album, they could benefit from aligning themselves with the downtempo nature of “Electrolove” as opposed to the aesthetic of “Hearts”. Given their previous album filled to the brim with earworm-inducing hooks and diverse instrumentation, perhaps change should be something used in moderation.