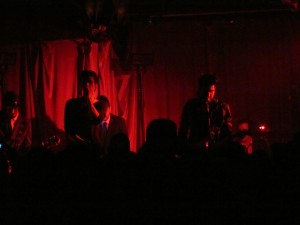 From the start, the night at El Mocambo was focused on an exceptional group of singers and their vocal abilities. Playing for a packed house, Neverending White Lights played an exciting set, both musically and visually. Entering to a dazzling light show, Daniel Victor and company kept pace all night as they played through a set full of fan-favourites including “The Grace” and “Always.” There were also great harmonies between Victor and Bed of Stars singer Evan Konrad, as demonstrated during “Falling Apart.” These two guys can sing and their voices perfectly complement each other.

Toronto Indie band Mr. And Mrs. Fox opened the night. Playing for a hometown crowd, they graced the audience with a set full of harmonies and on-stage charisma. Their set was followed by local band Lyon, fronted by the exceptionally talented Lauren Emily Malyon. The showcase of her vocal prowess, accompanied by her electric violin playing, was one of the highlights of night.

Before joining Neverending White Lights on stage, Evan Konrad played an unplugged set of his own, focusing on just his voice and acoustic guitar. Konrad took requests of songs from his impressive repertoire with Bed of Stars and also played several new tracks.

The creativity of Neverending White Lights was prominent in their show, demonstrated by the dramatic light show and stage effects, soulful guitar solos, and the harmonies between Victor and Konrad. Their driving rhythms really got the crowd moving. For a mid-week concert, the atmosphere was incredible. Seeing such a group of musicians in a bar setting seemed a privilege, as the show demonstrated talent, creativity, and composure that could be headlining arena concerts.