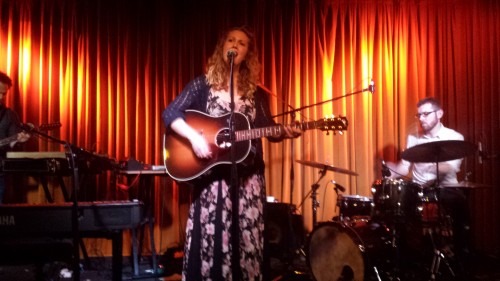 Playing for what was announced as a sold-out crowd, Caledon native Megan Bonnell brought her folk-pop sensibilities to a receptive crowd at Toronto’s Drake Underground as part of her final tour date with labelmate Emilie Mover. Without need for affectation, Bonnell and her four backing members (including the co-producers of 2013’s Hunt & Chase, Chris Stringer (guitar/electronics) and Joshua Van Tassel (drums)) delivered an hour-long set that magnified the openly heartfelt nature found on Bonnell’s recordings, creating an exceptionally intimate atmosphere for the crowd and band, alike.

Bonnell and her band (also consisting of a female backup singer/tambourine player, and a bassist) not only successfully translated the potently emotional nature of her studio recordings for a live environment, but also surpassed my own expectations through the sheer richness, explosiveness, and clarity of the sound. Her personality was on display as well, as she made an effort to connect with members of the crowd, gathering them close in order to better connect with everyone. Her engaging, playful, and amusingly awkward personality found great success, while her vocals were as dynamic and breathy as heard on Hunt & Chase.

The pensive nature of ‘We Are Strangers Now’ was heightened through the visual of Bonnell seemingly isolated on-stage from the rest of her band, while the standout of the night, ‘Hunt and Chase’, was an exercise in taking an otherwise energetic track, and blowing it up with a level of loudness and speed not otherwise found on the album. It is this dual quality to the performance—the ability to accentuate the soft, sad undertones of the slower-paced songs, and intensify the hard, upbeat atmosphere of the higher-tempo songs—which truly turned it into a spectacular night for Bonnell.

Bonnell also performed multiple unreleased tracks, the tone of which seem slightly harsher than her previous material’s folk-pop nature. ‘The Web’, in particular, possesses a fury that might be considered unthinkable for an indie, folk-pop songstress. It is precisely this ability to surprise, however, which marks Bonnell as being a crow left of the murder, an attribute which established and potential listeners alike, will feel drawn towards.