Tag Archives: all the faces

With the finale of The Office fast approaching, I’ve had moments of deep reflection on the comedy that accompanied me through undergrad and beyond. Over half a decade, I came to care for the characters. I had a lot riding on the Pam and Jim storyline. I had a Dwight bobblehead. I was all in.

I always had questions about the character of Creed. His enigmatic presence in… what was it… Quality Assurance? was always a random highlight on the show. As an avid fan learning everything there was to know, I was surprised to find out that he was a member of an influential 60s folk pop band, The Grass Roots. That satisfied my thirst for knowledge. That is, until I caught wind of his current musical endeavours.

Creed Bratton has had an interesting 70 years (don’t let his hair fool you) on this earth. He traveled the world, he experienced the highs and lows of superstardom, and he built his role on The Office from the ground up. Literally starting as an extra, he pitched the idea of his character to the show’s producer and it stuck.

It’s that resiliency that makes his story so appealing. He has released a number of solo albums since his time in The Grass Roots, but his 6th, Tell Me About It, delves more into the story of Creed. Split into three acts (the last of which is released on May 21st), he takes us along the winding path that’s brought him here. I had the pleasure of talking to him about his music and The Office: 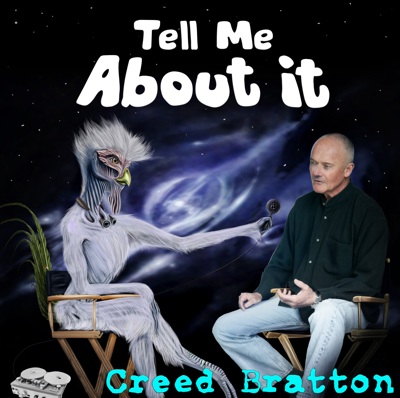 Tell me about “Tell Me About It“

The album itself is an “audiobiography”. It tells the story of the ups and downs of my life. The success, The Grass Roots, the down periods, like a story. It brings up The Office towards the end. PF Sloan, the iconic writer and famous recluse who produced a lot of The Grass Roots stuff, is on it. Rainn Wilson is on it. I have the same band that I used for my “Bounce Back” album. It’s a lot like my live show, I sing original songs and then in between, I morph into Mark Twain, except the Creed version.

What inspired the “audiobiography” concept?

When we started recording the songs for this, my 6th solo album, my producer Dave Way helped me realize that all the songs were telling a story. He put them in an order and I thought “Oh my god, this does work!” We went from doing an album of songs to doing it like my show, with some comedy bits and spoken word bits, a concept album.

Is there a reason you haven’t written it all out in a more traditional autobiography?

I think it’s just reluctance. When you start writing that stuff down… I believe that there’s quite a few more chapters of it so I don’t want to do the book too prematurely.

How much of your Office character is grounded in reality? (i.e. Do you enjoy mung beans?)

I like alfalfa sprouts in my salads. I wouldn’t say that I’ve ever said “Mmm… mungbeans”.

[laughs] We were actually kicking around the idea of getting Creed an aquacar, showing him getting into the harbour and driving off to Canada.

How have you felt like the show has changed since Steve Carell’s departure?

I used to think that he was the show. Nevertheless, this last season has been a really good one. It gets funnier and funnier. Now that I’m thinking about the finale, I think it will go out on a good note. It was impossible to capture what we had with Steve, maybe some time had to pass before people embraced the characters that were left.

Has the finale already been filmed? How was it?

We filmed it a couple of weeks ago. On May 4th, we’re going to be in Scranton, the whole cast. The town’s been great to us.

Have you encountered any resistance when promoting your music from people who don’t know you outside of acting?

It’s funny, some people from The Grass Roots era, the babyboomers, they know me from my pop music stuff. They come to hear the music. Not all of them are aware I’m a TV actor. When I performed in Boston, there was a younger, college crowd mixed in. They said that they came for the comedy because of The Office, yet they found that they stayed around for the music.

Along those lines, what do you feel like is the biggest difference between acting and performing music?

I don’t really think there is a huge amount of difference. One is singing with a guitar. The other uses the body as the tool you work with. When you get down to the nitty-gritty, you’re emoting and telling a story, whether through a visual or through the audio. They’re more similar than you think.

What do you feel is the next chapter for Creed?

The show is over, the album is finished. I’m making myself more available for film. I’m writing a screenplay and optioned another. I’m also writing a pilot with my friend Chuck… I’m [also] always writing songs. The songs are always coming through. I hear melodies and lyrics and I write them down all the time. Over the next few years, I’ll probably be more focused on releasing singles.

Speaking of singles, what are your thoughts on Leslie David Baker’s (aka Stanley) pop single?

I really appreciate you taking the time to talk to us. From Creed’s perspective, what is it that you’re going to miss about the show?

I’m just going to miss how much we laughed. So much hilarity going on. The script is more hard work but, in between, the kidding with each other, it’s really the fun stuff.

Fans of my character, that strange old crazy guy… the writers came up with some great stuff and we’re going to say goodbye to him and all the characters and find completion. That feels pretty good. I don’t think the fans will be left hanging or disappointed.

Listen to “All The Faces” (featured on The Office finale) below:

Tagged acting, all the faces, creed bratton, office finale, solo career, tell me about it, the grass roots, the office