When Jeff Mangum (of Neutral Milk Hotel) announced a dozen shows out of nowhere, I knew that I had to be at one. Luckily enough, two of those shows were Toronto dates. Not having luck online, I was lucky enough to score tickets in person at Soundscapes for Saturday August 13th. This is the review of that night.

I arrived at Trinity St. Paul’s approximately 30 minutes before doors were to open and was about the 100th person in line. I could already tell that I was amongst true fans and that was a great feeling.

The church itself was a beautiful venue and the fact that it was a dry event really didn’t hinder the fun. The only issue, and it was a major one, was the lack of air conditioning. As each row filled, the church became more and more like a hipster sweat lodge. But when the music started, it became easier to ignore.

Openers Andrew, Scott and Laura (Members of Elf Power & The Gerbils) had an interesting sound. Each vocalist had a different vibe, from Kimya Dawson to The Decemberists, and overall, it was a great way to start the night. The highlight of the set was “Two Skies“. As good as they were, I couldn’t help constantly checking my watch as the set went on in anticipation of what was to come. 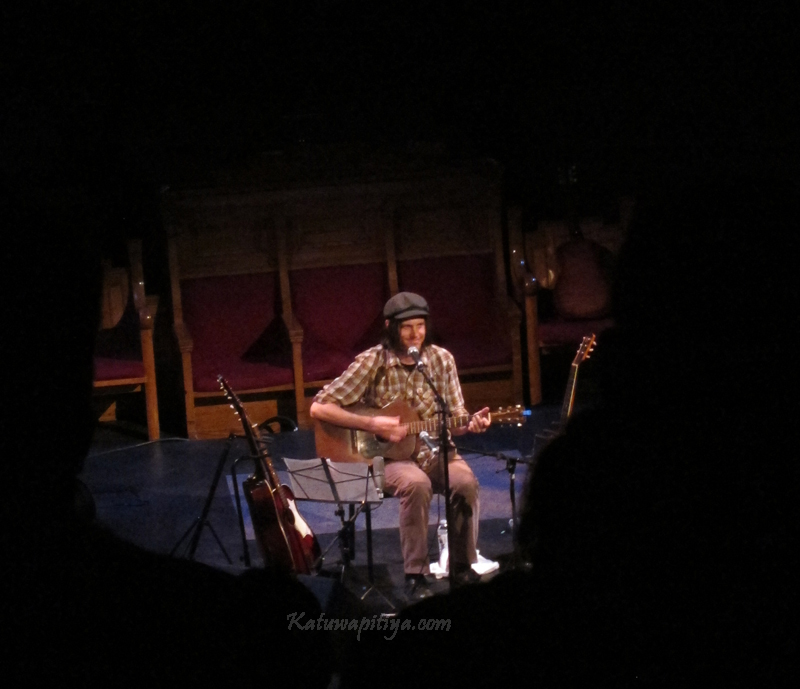 The crowd exploded when Jeff Mangum came onto the stage but quickly fell silent when he opened with “Oh Comely”. These were the songs that many have played and replayed for the last decade and the last thing people wanted to do was annoy the labeled-recluse Jeff Mangum, complete with his recluse hat.

Except he wasn’t how many expected. His banter with the crowd was humorous and friendly (responded to a “we miss you!” with a “but I’m right here…”) and after it was clear that he was encouraging crowd participation, the vibe of the concert became even more intimate and special.

You could almost feel the people swaying in the pews during his rendition of “In The Aeroplane Over The Sea” and that same crowd became a loud gospel choir, bellowing “III LLLOOVVEEE YOOUUU JEESSUUSSS CCCHHHRRIIISTTTT” during his “King of Carrot Flowers Pt. 2”. Jeff Mangum isn’t the best singer in the world but the rough edges of his vocal range yield a sort of endearingness that I cannot compare to another musician. Any concerns about rust from his period of non-touring were completely unnecessary.

The night finished off with “Engine” as an encore and though the crowd had participated throughout (even humming an extended note which Jeff Mangum used as a backdrop for a song verse), it was quiet enough to hear a pin drop. The vulnerability of his voice paired with guitar was simply magical. To leave that church was to feel renewed (though I’m sure the moksha yoga temperature had a bit to do with that too).

During his set, he even encouraged questions to be asked from the crowd. When someone asked him “When are you going to next record?” he answered that he wouldn’t record until his heart is ready. For all our sakes, let’s hope that happens soon.

Here is audio of his rendition of “A Baby For Pree” from his first album “On Avery Island”: